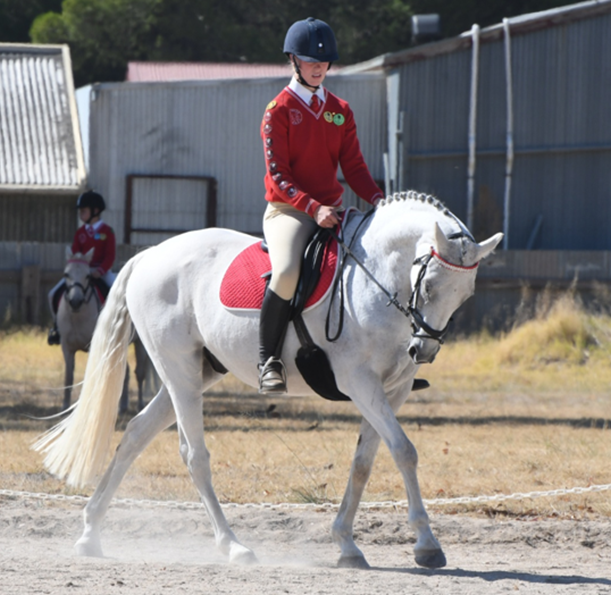 Recently, I had the opportunity to participate in the National Pony Club Championships which was held at Sydney International Equestrian Centre from the 7th to the 13th of October. It was a fabulous experience being part of the South Australian Senior Prince Phillip Mounted Games Team with fellow club member, Megan Brown.

This experience has broadened my physical and social skills as well as learning about both myself and my horse’s abilities through the sport. Before attending State trainings for Mounted Games, my drive for horse riding wasn’t as strong as it could be but through these trainings, my passion for horsemanship has increased. I practised hard in my own time and participated in multiple exercises, including; running, cardiovascular endurance, yoga, cycling and horse riding. Through this, both mine and my horse’s fitness improved and I gained the right flexibility that allowed me to vault my 15 hand mare for the first time. I continued to take feedback from my coach at trainings and used this to build on my skills, enhancing my coordination, team skills and accuracy, which then showed continued development and improvements when in competitions.

Travelling with my horse and the SA Mounted Games team was a first for me and helped further build our team bond and the development of lasting relationships. In Sydney, I was extremely proud and excited to represent South Australia and to wear the State uniform as well as riding at an Olympic venue. The walk from the campsite to the stables was lengthy and challenging at times but it made spending time with the horses more worthwhile. At the stadium, I had the opportunity to be a part of the opening ceremony, as well as watch a musical ride.

Throughout the week, I also watched International riders compete on pool horses through showjumping rounds. The skills that these riders carried were remarkable.
I was incredibly proud of my team’s efforts, despite placing fifth overall after 30 races over two days of competition. Our team showed their ability to ride in a fast paced competition environment whilst working at our accuracy and “quick fixes”. The Sydney weather was also cruel to us on the last day of competition resulting in us having to ride in consistent rain. Luckily our team didn’t experience any injuries that some other teams faced. Some of my game highlights include being able to successfully grab the tennis ball on my first attempt in the Hi-lo game (which is definitely more challenging when on a taller horse!), and all of my change overs being accurate in each of my races.

I am planning to continue my Mounted Games involvement at State Trainings, MGA and especially supporting my Lower North Zone and Barossa Valley Pony Club. I plan on spreading my knowledge through BVPC, in hopes of having a Club team and giving other riders the opportunity to further their games skills in competitions.